Tom West, Inc., has been committed to quality produce since 1954. Having stood the test of time, our principles will continue, and we are fully committed to the highest ethical conduct. We pledge to seek out the safest agricultural operations for our customers, consumers and the environment.

Thomas “TS” Scott West, a self-taught musician on the harmonica, played “Amazing Grace” at many funerals, and thanks to technology, his own will not be an exception. West is being remembered as an independent business owner, a fun-loving fisherman and a man with musical talent. That talent led to an album recorded with a few of his friends. Two songs from that recording — “Orange Blossom Special” and his favorite, “Amazing Grace” — will be played at his funeral today. “I attribute his musical ability to his mother. She was a piano teacher,” said West’s only child, Milton West. West was so talented that he earned a chance to play with Mickey Gilley’s band while vacationing in Texas. West, 92, died Friday of cancer, but his legacy lives on through his business and his music. Born and raised in Ocoee, West accomplished much in his life. Upon graduating from high school in 1933, he married his sweetheart, Mattie N. Barker; he joined the U.S. Army in 1941, serving for three years. West’s father, Sidney Duncan West, was a citrus grower. But it was West and his wife who turned the company into the large independent citrus-harvesting business called Tom West Inc. “He worked extremely hard,” Milton West said. “He worked almost seven days a week and did most of the work but had a lot of help.” Even in his final years, West still went into work, looking over the business and signing checks. That hard work paid off. The company is stable, moving 4 million to 6 million boxes of fruit per year and has ties with companies such as Minute Maid and Tropicana. Whenever he had some down time, West liked to fish. To him, it was a competition, one where he was usually the victor. “Fishing was his passion, his heaven, and he owned his own boats,” Milton West said. “He liked freshwater fish and most of his boats were small. “He had a bunch of favorite spots. He had one place that was called Ropers Sawgrass. He would catch like a 100 or more fish.” Another of his favorite spots to fish was Lake Okeechobee, where he was known to find a plentiful supply of bass. West’s wife Mattie died of a stroke. But he married again. He and Opal West were married for 22 years before he died peacefully at home, with his wife at his bedside. In addition to his wife and son, West is survived by three grandchildren and nine great-grandchildren

Sidney West came to Florida from Virginia at the turn of the last century to plant citrus. In more modern times, his son Tom West started growing and harvesting citrus after his service in World War II. Citrus provided for the West family in Ocoee over the years, but freezes, diseases, and uncertainty put the crop’s viability into question. HLB and dwindling grove size suggested it was a time for change.

Tom’s son Milton (who joined the business in 1964), and Milton’s son Scott (who came on in 2010), were charged with making the transition.

“Granddad called me to come visit him at his office,” Scott says. “He told me we needed to find something to plant other than citrus, so why don’t you go out do some research on alternative crops. That’s how we stumbled upon blueberries.”

Scott came back to his grandfather and reported blueberries might be the way to go. With that, he asked Scott to plant a trial on the farm where Tom’s home resided in the middle of a neighborhood right next door to Ocoee Elementary and Middle schools.

A miscommunication with grandfather had Scott jumping into blueberries in bigger way than initially planned on the 10-acres of citrus grove.
“I thought my granddad said push 5 acres of the citrus and put in blueberries,” Scott says. “The day we were pushing the trees my granddad comes up and says he had suggested only putting in 1 acre of blueberries as a test. I thought he said 5 acres. He just laughed and said, ‘We are doing 5 acres now. Let’s go and do it.’”

Tom West passed away in 2011, so the family says the blueberry farm is a tribute to his life and contributions.

To get educated about blueberries, Scott says he visited growers in the area who had planted the crop. He also credits Bert Sheffield from Island Grove Ag Products where he purchased his plants. Sheffield provided counsel on attributes of each variety and growing tips.

“Compared to growing citrus, blue-berries can be quite complicated,” Milton says.

“If you can’t listen and learn from other people about growing blueberries, you can forget about it,” Scott adds.

After the initial 5-acre test was planted in 2010, the remaining citrus was pushed at the location and another 5 acres planted. The family has another 20-acre planting nearby, and purchased a 15-acre farm in Williston.

“The Williston farm was about to die, so it was a big rehabilitation job,” Scott says. “It was basically like taking on a new planting. There were only two twigs sticking out of the ground and weeds were everywhere. We re-barked the beds and put them on our production program to bring them back. We took that field from 10,000 pounds to 50,000 pounds last season. I think we might get 100,000 pounds out of the field this year.”

As for the blueberry learning curve, Scott says getting the right fertility package is an important part of successful production.

“The first day we were putting blueberries in the ground, I had to leave for a while,” he says. “When I got back, the size of the circle of fertilizer I had instructed to place around the plants had shrunk, and the concentrated dose ended up almost frying the plants. So, I went to a slow release fertilizer, which most growers do not use. But, based off the success we’ve seen with it, others are taking a look at it.”

A strong foliar fertilizer program also plays an important role in the program. Scott takes leaf samples to identify and address deficiencies in the nutrient package.

“And, water is very important,” Scott adds. “Bicarbonates in your irrigation water can clog up these plants’ root systems. A lot of the wells here have high bicarbonates, which is a big deal in blueberries. I have an acid injector on my irrigation system that turns those biocarbonates into available calcium.”

On the original farm, Scott uses surface water from a lake next door for irrigation. In the lake water, the biocarbonates have settled out. But, after petal fall or February 1, he switches irrigation to drip and well water. That’s when attention to bicarbonates comes into play.

Having a farm situated in the middle of a community has its disadvantages like trying to grow a crop in the view of people who might not fully understand what it takes to produce successful yields. The West family has decided to manage around the disadvantages and embrace the positives of growing in town.

In 2012, the family opened its Ocoee farm to the public for U-Pick in addition to its normal harvest for commercial customers. Beyond the business benefits, the family says it has been a tremendous opportunity to engage with the community and educate the public about agriculture. Less than a half hour from Orlando, the farm is perfectly placed for U-Pick success.

Susan Hembree (Milton’s daughter) joined the farm to help with third party food safety audits and handles marketing for the business. Milton’s other daughter Stacy Williams helps run the U-Pick and is the farm’s office manager.

“I think we have potential to grow the U-Pick even beyond the success we’ve already seen,” Stacy says. “I believe people are still learning about us, so there is room to grow.”

Social media has been a significant tool in marketing the U-Pick operation.

“Facebook has been huge,” Susan says. “Once we got our website (TomWestBlueberries.com) and our Facebook page where we wanted, people were like, ‘wow that is in our backyard.’ Social media is one of the best tools we have to get people out to the farm.”

Other marketing tactics for the U-Pick operation include ads in the local newspaper and Orlando Family Magazine. They also run a spot in local movie theaters to promote the farm. 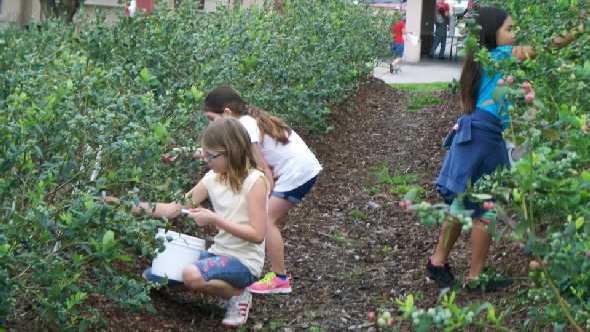 The U-Pick and being located literally next door to two schools has provided the family the opportunity to teach urban kids about agriculture. Throughout the season, numerous school tours are hosted on the farm.

“One of the funniest things about this job is we love kids, and for me having a background in nutrition, I know for a fact if you show kids where food comes from, they are going to be interested and more apt to give it a try,” Susan says.

Kids touring the farm are taught about good bugs, bad bugs, honeybees, and how the blueberries grow from bloom to berry.

“We let the kids go out in the field and pick a clamshell of berries and encourage them to eat as many as they want,” Susan says.

“The kids take those blueberries home, so hopefully they will come back and visit us with their parents,” Scott says. “Hopefully, we are building new blueberry consumers of the future.”

The family is working with FDACS get their blueberries in the lunches of local school kids through the department’s Farm-To-School program.

“The Agriculture Department is really looking for ways to connect the foodservice people in the schools with the farms to get this fresh locally grown produce in our schools. Our farm has the capability to pick the fruit, pack it, and deliver it to the school, so it makes sense that we engage with them to look for opportunities.”

Often one of the challenges for the school districts has been produce prices and what is in their budget to pay for locally grown produce. FDACS is working with school districts and farms like Tom West Blueberries to determine how entitlement dollars from USDA can be utilized to help pay for fresh, quality fruits and vegetables.

“When the blueberry market is high, it might not make sense for the schools to purchase from growers, but when the market begins to drop, it might make sense,” Susan says. “We have ample opportunities to get these fresh fruits and vegetable to these kids — thee meals per day. I think FDACS is trying to make the Farm-To-School program more flexible and able to deal with the districts and schools on an individual basis to meet that goal.

“Getting in the schools and the U-Pick is all about reaching out to the community and giving families a chance to do things they can’t normally do, like pick blueberries,” Susan says.

“A lot of kids and adults who visit us have never eaten blueberries, which blows my mind,” Scott says. “But, then I think back to before we were growing blueberries, and we didn’t eat them regularly.” 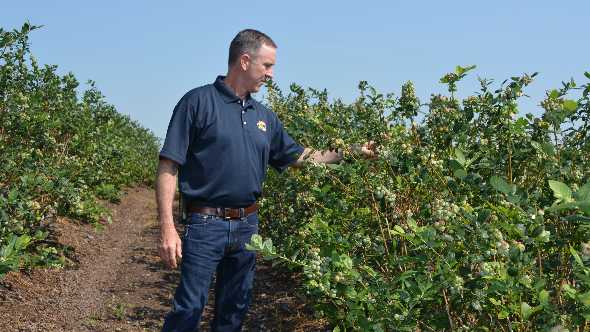 Scott West says proper variety selection is crucial in getting a new blueberry farm off on the right footing. Here are his comments on the varieties planted on his family’s farm.